Dealing with generations in the organisational context

X, Y, Z, I … seeing generational gaps and the differences they bring by as a simple trend would be a clear understatement of the phenomenon. Who, among you, hasn’t heard at least once of the stereotypes and theories surrounding the different generations, and who hasn’t tried to find which one you belong to? Between the »Baby Boomers«, the generations X,Y, Z and I, everyone is categorized into well-defined groups and criteria: what kind of people these generations represent, when they were born and why they think in their own, particular way.

I have gone through several articles on how to deal with different generations in organizations, and can’t help but try to identify myself with one of them, find out which one I »belong to«. I was probably born around the same time as most of you, who are reading this note right now. Our parents, who were in majority born right after World War 2, knew a world were nothing was easy, and money was everything. Manufacturing jobs, production lines were blossoming while the world was trying to make up for the dire and hard war times, giving birth to the »materialist regime«. Typically, at the age of 18-25, our parents had become typical hard workers, moving to the main cities to work, and sending back home the little money they had earned to support their families – which often included grandparents and several younger siblings. They worked overtime and were loyal to their company, most of them their entire life long. They saved much, spent little, aimed to own a small piece of land they could build a house on. If I am correct, this pretty much describes the lives of my parents’ generation – the so-called »baby boomers«.

Their children – »generation X« and my generation – are currently raising today’s Y and Z children. Those were born after the video tape, remember home phone numbers in a blur, and communicate in a completely different way than their parents: Modern dialectics and linguistics changed into TEXT-nology – even around the dinner table.

At home, the baby boomers (my parents), the Xs (myself) and the Ys and Zs (my children) seem to get along just fine. Things were different when I was a child: I used to play with empty boxes, cans and containers; toys were exceptional and given only for special occasions. Today, my ever-saving, extremely careful parents are retired, and seem to make the most of their retirement fund and savings. They are dazzled at the idea of being able to get what they can afford, and do not hesitate to spoil their grandchildren with what they probably wanted, but couldn’t do for their own children. As a Welsh proverb says, »Perfect love sometimes does not come until the first grandchild«. 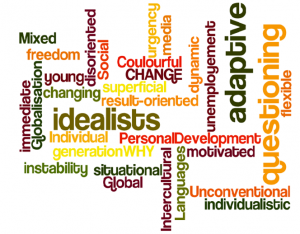 When it comes to the corporate and professional sphere however, things tend to be more complicated. Because all three generations were raised in such different ways, with different technologies and social backgrounds, misunderstandings and conflicts can occur. This topic is becoming increasingly important to companies, as generation Y is currently entering the labour market: »How can organizations deal with generational differences, especially when it comes to handling change and the company’s subsistence?«

Dealing with people has never been easy. Most of the time, the Human resources department is given the delicate task of monitoring »corporate harmony« and dealing with such issues. In my own perspective as an HR-Manager, I do not believe that this task should incur to this department in particular. It’s not that I don’t want to have to deal with it, on the contrary; rather, it’s because I believe that every manager is an HR-Manager. Teams somehow function in a similar way than families. The HR department can’t do anything more than organize team-building activities, which is enjoyable and necessary, but also only acts on the surface of the problem. The root of it is, in my opinion, actually »COMMUNICATION« between leaders and team members, who of course differ in terms of generations. Many organizations lose a lot of time trying to fix the problem of »organizational relationships« rather than simply accept the differences between people and live with them rather than against them.

Let’s consider, as an illustration, the following scenario:

Upper Manager, Baby Boomer, my subordinate: »I don’t care HOW you do it, we must cut ALL costs down. These are all useless expenses, and what are ›Employee Relationship Activities‹ for anyway? They should be thankful to have a job in these unstable economic times. Cut heads if you have to.«

Me, Head of Department, Generation X, to my Junior Manager: »Well Junior, we have to rethink our costs, some of them must be cut down. Could you please check them, as well as the headcount plan, and delete all the activities you believe are not absolutely necessary from the budget. I know it is hard to accept, but we might need to let the underperformers go or re-arrange the organizational chart somehow.«

The Junior Manager (Gen Y): »This is absurd – he can’t cut off associates just like that, it’s almost against Human Rights! This is unfair; the company should rethink its position on letting people go for the sake of its margin!«

In this scenario, who do you think is right or wrong?

My answer is actually: No one is either right or wrong. If we look at the problem in an objective way, the solution involves finding the »bridges« between opinions – and generations. The one who can create a bridge to close the generational gaps can shorten the distance between trans-generational teams in just 3 simple steps:

When you think about it, who do you believe is best suited to close this gap? Those born at the time of the first Star Wars episode, when mankind was sending spacecraft out to the skies? Who knew the era of Walkmans, video games, and have gone through each milestone of communication technologies – from simple pagers to iPhones, and who were the pioneers of internet usage in the early 80s. Aren’t the best bridges the ones who can link the past and the present, the generation X? I would like to believe so.

Three generations are currently at the core of organizational development, and companies have to be able to balance and reduce the gap between their different beliefs and attitudes. Now is the perfect time for corporations to take a look inward and reflect on the bridges they have, and those they still have to build, as change is an ever-continuing phenomenon. So, are you the bridge?