Spectrum of Balance – A cultural model for organizations

The cultural model »Spectrum of Balance« was developed by SYNNECTA in co-creation with partners at other companies. It gives culture a language and thus people in organizations a basis for reflection and discussion. The model is descriptive and not normative. It is easy to understand and can be used in a simple and flexible way. It is available in German as well as in English, now. 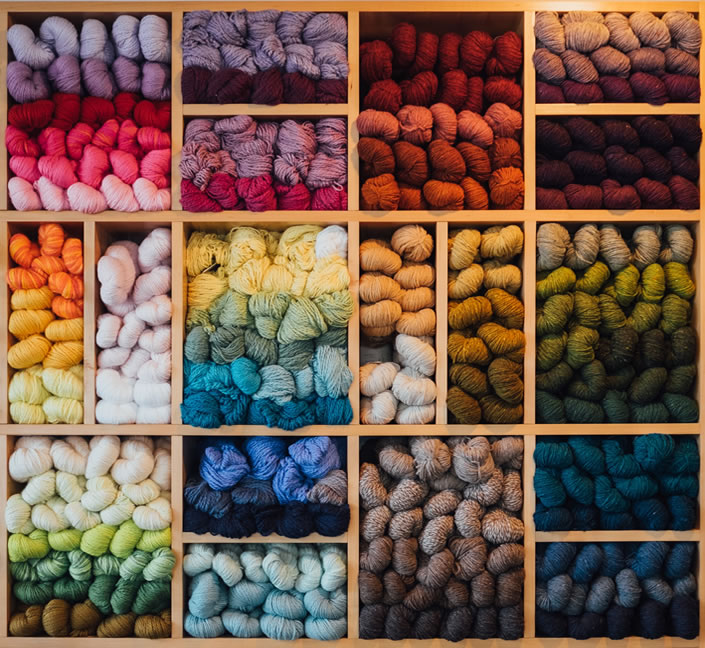 At the beginning of a transformation process in an industrial company with more than 30,000 employees, the CEO emphasized: 50% of the success is due to the reorganization and the implementation of the new strategy, but 50% lies in the transformation of the corporate culture! Peter Drucker with his statement »Culture eats strategy for breakfast« sends his regards.

Now, from our point of view, it makes only little sense to set up and implement culture transformation as another change project, according to the principle: 1) analyze current culture, 2) define »to be« culture and 3) implement (s. also blog »Mission Statements in Times of hybrid Societies«). Why?

On the one hand, culture is omnipresent and manifests permanently in our feelings, thoughts and actions and thus in communication, cooperation, and leadership of organizations. On the other hand, culture is intangible, constantly in flux and its effects are often not consciously perceived by people. Much is hidden and part of the relationships. Personal perception and interpretation by individuals and social groups have an impact on experiencing the culture, too. Finally, the context plays an important role. As a result, there is neither »the« or »the right« culture for everyone in an organization, nor can culture be transformed in a mechanistical manner.

It is most appropriate to recognize and understand culture and cultural patterns by reflecting and discussing it with others. This requires words and a common language as well as possibilities to state differences. There are already many cultural models that can be used for this exercise. However, they often use a normative approach (e.g., Spiral Dynamics or the model described by F. Laloux in »Reinventing Organizations«).

Rüdiger Müngersdorff therefore designed a non-normative cultural model based on five cultural aspects or dimensions, which was elaborated in an internal SYNNECTA project group. It can be used in discussions with individuals and small groups on an ad hoc basis or in a more structured way in workshops and large-scale events. In the context of a cultural transformation process, it may serve as a basic model. It can be customized in terms of content and language as well as methods and processes. We have already gathered many positive experiences with its usage in various organizations.

In addition, we further developed the model with partners (see below) from various HR and OD departments of the Bosch Group. After several iteration loops, the »Spectrum of Balance« cultural model consists of six cultural aspects: 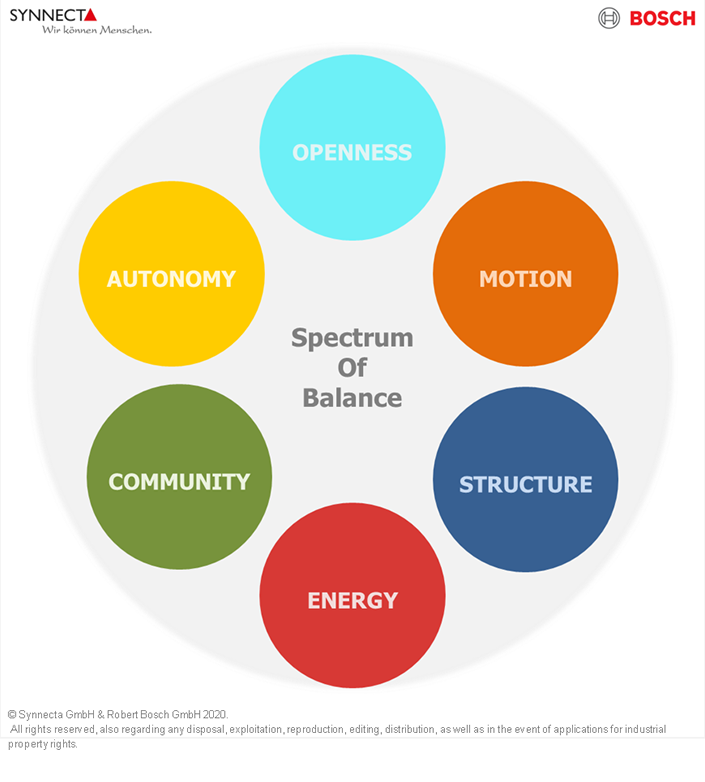 To each aspect or dimension an aspect card give a concise description of the content and an evaluation card sketches possible expressions, how people may experience the respective aspect in a positive (healthy) or in a negative (unhealthy) way. 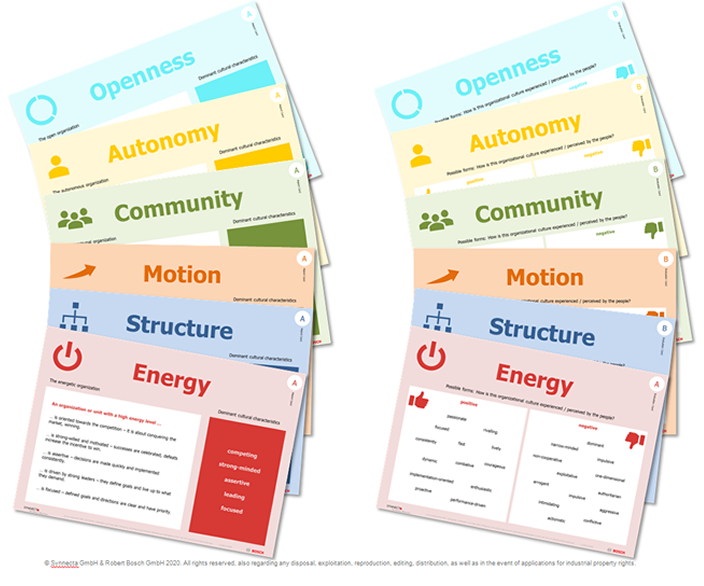 Furthermore, the original model includes change cards, which provide initial ideas and indications of what can be done, to strengthen a particular cultural aspect in an organization, depending on the current situation / cultural balance.

The model has been used in workshops, large scale events as well as so-called Open Office events. Therefore, different scripts are available. 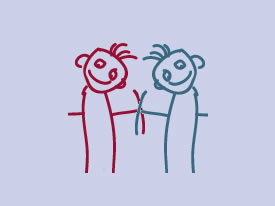 »Same same, but different« – what does the salesman across the street mean with this strange sentence? You can hear it coming from every corner of the city when on a stroll in Bangkok. What is the sense behind it? it seems to be due to that exact lack of sense that this expression has become cult in Thailand, to the extent one can now find it printed on T-shirts. Still, this new fashion statement doesn’t solve the mystery of what the salesmen are trying to convey.

To be honest – we really don’t know. Since the sentence is being used almost universally and for any purpose, it seems to be on its way to becoming stranger than it already is. However, when you decide to take a closer look at this seemingly completely absurd sentence, you will discover that it might, in the end, actually have a meaning.

All humans are anatomically and physically equal, regardless of their area of origin. We are all humans, and therefore we are all »the same«. However, particular cultural circlesdiffer from each other and so are »different«. We are born, grow up and are influenced by the people around us. We adopt the values, norms and traditions of our particular culture, and this way become a part of an organisation. As a result, many different cultural spheres emerged around the world, some with considerable differences.

When we decided, a few months ago, to do an internship at SYNNECTA Bangkok, we were fully aware of the fact that we would be hurling ourselves into cultural adventures. Our expectations lived up to the reality of our daily life, a world with a completely different mentality to ours.

We arrived in a colourful and multifaceted city with splendid temples and a multitude of people. Five weeks of living in Bangkok have taught us that the Thais are extraordinarily relaxed people. For instance, at the airport, a place most Europeans would consider rushed and stressful, we were amazed to sense a lack of stress in the atmosphere. This easy attitude towards life is palpable even in exhausting situations and places such as this. A simple sigh seems to be enough for a Thai to get over a stressful situation, as for example the heavily hectic and chaotic rush-hour traffic, which usually makes us Europeans rather annoyed and aggressive.

Bangkok is thus dominated by a take-it-easy-lifestyle. However, this attitude has a negative effect when dealing with the environment and sustainability. Waste production is considerable, its removal and reprocessing dreadful, and a large pollution cloud is hanging above the city. The air-circulation above the streets is also limited due to all the skyscraper constructions. All these elements have proven to be hazardous to health.

Thai people are renowned for their kindness. Regardless of whether in the supermarket, on the streets or in the public bus, the Thai people are always smiling and helpful, especially when selling.

Another noticeable aspect of Thai life is the economical pressure. As consumer goods abound, so does competition. Uncountable salesmen permanently try to advertise their products by approaching potential customers. They might appear very open and extravert whilst doing their job, but getting to know their personal side can prove to be rather hard, as they fiercely protect their privacy. This reticence could be explained by the fact that they do not seem completely comfortable with the English language.

Every day, we continue to encounter these contradictions. On one hand, this country shows off an exaggerated openness which can be overwhelming to us, yet Thai people also appear to cherish their conservative attitudes and traditions.

All these characteristics are particular pieces of the Thai cultural puzzle. A city’s culture does not only influence its inhabitants, it plays a non-negligible role for foreigners who visit country as well.

Tactfulness is always important, especially in a business context. National cultures have an enormous influence on the way companies are led, as shown by Geert Hofstede’s study »National Influences«. To maximize your success rate with international corporations, it is necessary to study the culture they operate within, and behave accordingly in day-to-day business practice. It is therefore advisable to ask a citizen from this culture for expertise, since the key to success resides in people, and therefore their culture.