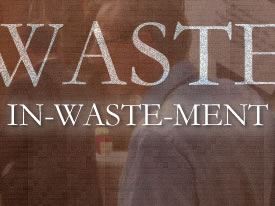 Friedrich Nietzsche has his controversial figure Zarathustra say these words, and thus creates a person that one wouldn’t expect to find in the context of a business enterprise. Because, in the economy wastage is always viewed as something negative: it consumes money, which cannot be spent productively any more – and this way reduces profit. Someone running his company according to Zarathustra’s policy would probably go broke sooner or later. As investment, every dollar spent must bear the seeds of future profit within it already today. If not, you’d be better off not spending it.

But, if you heed the words of Georges Bataille, a closer look at the theme of wastage in the business enterprise can be worthwhile nevertheless. In 1933 the controversially disputed philosopher asserted in his work‚ The Abolition of Economy, that every examination of the economic activity of mankind that focused exclusively on production and productivity is incomplete; consumption, too, should be regarded in all its forms. But what really created a scandal was that according to Bataille, it is wastage – the senseless squandering of capital – which was really what defines being genuinely human. Hence Bataille is radically re-evaluating wastage in a positive sense: pyramids, castles, cathedrals, but also beautiful jewelry, profound literature and fine arts – everything we consider as »culture« and survives through space and time – is in Bataille’s view capital that we positively waste in »real« personhood, keeping it out of productivity. The person of our time suffers from the banning of wastage from his life and only focuses on his productivity, bereaving himself of his real personhood.

In modern companies wastage is seen as the worst enemy with seven faces (transport, inventory, motion, waiting, over-production, over-engineering, defects). According to the concept of lean production, the aim is to eliminate it completely.

Every possible gap is weeded out and cycles are constantly optimized. On top of that is the constant acceleration of the work world. Meanwhile in our counseling projects we experience more and more management personnel complaining that they don’t have time for the really important things in life. Employees feel less and less appreciated by their superiors and colleagues. And when one penetrates deeper in conversation about what appreciation means, it often leads to the same subject of waste. Because, appreciation is something that one experiences when the »boss isn’t only interested in work subjects«, when »one can take five minutes to talk about something else«, and when »every once in a while people do something together« … – in other words: when one is not being productive and people can waste time on each other.

Naturally no business enterprise can afford to constantly waste (which Georges Bataille also realized). But despite this, in addition to all their other investments, I believe that business enterprises would be wise to also risk In-Waste-Ment: Consciously wasting time and resources without carefully considering returns. As In-Waste-Ment, wastage in the positive sense could legitimately take on central importance for employee motivation and loyalty, for creativity and innovation, and for cooperation and leadership.

Interestingly enough, 130 years after Nietzsche and 80 years after Bataille, with his book Give and Take the current shooting star of American organizational psychology again touches on the subject and shows that In-Waste-Ment can be successful: Following years of studies in numerous business enterprises Adam Grant has come to the conclusion that a giver-attitude promises the most in benefits. Contrary to all expectations the most successful people are not the egoistic takers á la Gordon Gekko, who, with their alpha type affectations are only interested in their own profit. They are also not the fair matchers, who, in their interest in reciprocity, carefully balance their giving and taking. According to Grant they are the givers: Management personnel and business managers who follow the maxim of Zarathustra in the economy and successfully waste in the sense of In-Waste-Ment. They give without thought of what they receive in return.