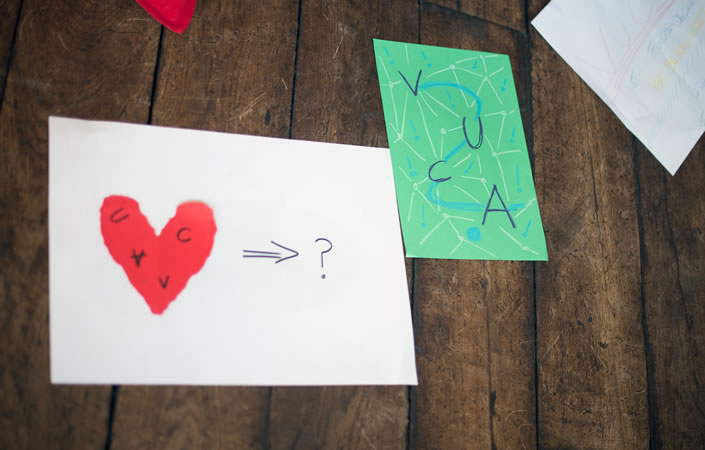 SOPHIA 2014 brought together SYNNECTA consultants and trainers with participants from the worlds of business, academia and culture in the loft style, autumnally warm atmosphere of the Cologne Kunstsalon with a view across the colourful rooftops of the south of the city. The goal was to work together to reach results on the newest issues in organizational development and change management.

The keywords of this event were Volatility, Uncertainty, Complexity and Ambiguity – in short: VUCA. They pithily sum up the pervading sense of life and perception of reality. Markets and cultures are developing at rapid speed, and decisions have to be made at the same speed. However, there is often a lack of the necessary basis for decisions to create an unambiguous situation. There is no (longer) a right and a wrong. Organizations can no longer provide their employees with the security they once were able to give (Ironmongers Jones once and forever).

There are reasons why businesses are at least partly leaving the relative security of a hierarchical bureaucratic organization behind and are opening up to entirely new ways of operating. These constitute great opportunities for some and perceived danger for others. Globalisation used to be understood to be a mere extension of the markets in the industrial nations; it has now developed an entirely new dynamic. The exponential rise of networks speed up markets,has opened wide the field for the competition and had driven the ability to enter a market as well as the speed of innovation. This dynamic demands organizatorial answers and at the same time new abilities and attitudes among managers. In Cologne, both sides came into view: businesses are facing up to the challenges and looking for ways to integrate traditional, hitherto successful action. There developed the lively atmosphere of a searching dialogue.

How can we as persons and as organizations react to VUCA? Rather: How can we leave the reactive role and use the opportunities that VUCA holds? How much of the VUCA situation is down to us and how do we want to design our businesses in the future? SOPHIA is a workshop format that is an answer in itself, providing a space for dialogue, learning and experience. It gives the participants copious room for personal engagement, returns to them their responsibility to learn and yet ensures that there is a secure and stabilizing environment. Individuality, freedom and communality are brought into a productive balance.

Moving away from what we’re used to, the rigid processes and the limited view, we set out in order to do something different – or to do something usual in an utterly different way. It is an enriching and inspiring experience that sometimes demands that we leave our comfort zone. Thoughts and feelings like »I don’t know how to do that«, »OK, I’ll do it, but it’s not pretty«, »What for?« are typical among people who are in the middle of change processes: even those who are highly willing to change, who are creative, flexible, take the initiative and are resilient.

The friendly and inspiring framework of SOPHIA allowed us to create a protected space where the participants were able to try out, enact, test boundaries. Take, for example, the project »Me-enactment – staged self-portraits«. Each participant developed their own individual self-representation concept together with the photography artist Bettina Cohnen from Berlin. The immediate questions that arose were not only »Who am I and what makes me what I am?« but especially also »What do I want to present of myself to the outside world and which of my many faces will I use for this communication?«

Every day, we live with our own complexity, even our contradictions. However, in times of social networks and the like we have to also deal with the fact that the messages we send out develop a life of their own that we can no longer influence in a meaningful way. At the end of SOPHIA, the participants not only had spectacular self-portraits that could not have been more different. They also presented their photographs to the other participants – the »public«. Everybody was allowed to attach notes with descriptive terms to each of the other portraits, so that the wide range of messages contained in each depiction as well as the individual ways of interpreting them had to be »endured« directly.

On the topic of »enduring«: The participants were allowed to experience in several instances the fact that nowadays it is almost impossible to be an expert at something and remain so. They kept having to resort to the art of improvisation: while they were creating Lego constructions as much as when they were brainstorming and clustering on questions of how persons/managers/organizations react to VUCA.

The same was true for two musicians who were invited into the SYNNECTA house on the Friday evening. Guitarist Vincent Themba and bassist Ulla Oster had never before met. The participants were allowed to witness how a minimalistically staged concert grew out of the moment: The wonderful effect achieved by the artists stemmed from a shared flow that emerged partly from dialogue, partly from taking turns to lead. The concert was followed by a lively discussion on improvisation, own attitudes, roles and inter-personal relationships, working and being together. In contrast to the expectations of many participants, who kept returning to the topics of management and power relationships, the musicians talked about trust: trust in themselves and in others. Trust as an attitude that formed the essential basis in order to be able to create something good together as well as alone.

The notion of »trust« came up again and again at SOPHIA. It is important to note that this was not about the trust that is based on tradition and experience. It was about the kind of trust that is given and received. The expectation that trust ought to be earned is almost always disappointed. Especially in the world of VUCA, large and small things will keep bringing us to fall. Trust creates vulnerability and that takes social courage. Where it is supposed to grow into a confirming attitude, trust also implies the ability to forgive: your fellow humans, your colleagues, and most of all yourself. Forgiveness ensures that trust can continue to exist and that valuable energies will not be lost on the »why« of failures, but will rather permit widening of the horizons, attempts at what is new, approaching problems with new strategies. On the one hand, that makes us resilient and on the other hand, it enables innovation and »soft« values like intuition, childish naivety (as a condition of creativity), enduring ambiguity and not least self-reflection.

Self-reflection formed a large part of the Tour de Cologne. Three very different guided tours led the group across Melaten cemetery, into the Rautenstrauch-Joest-Museum and to two churches in Cologne. Careful input and interaction focussed on the experience whilst giving the participants the time to reflect. Next to the understanding that the city can be used as a space for experience as well as a sphere for introversion, a number of overwhelming moments emerged spontaneously and surprisingly.

The meaning of human action and earthly existence was gravely questioned in a lecture by »Astro-Entertainer« Christian Preuß. He gave grounded and mind-expanding perspectives related to the earth, the galaxies and the entire universe. They opened up entirely new versions of VUCA: impermeable, unpredictable, unsystematic space is truly »VUCA«. That insight immediately called up the notion that maybe the VUCA conditions we are facing in our every day lives were actually harmless – by comparison. Christian Preuß sweepingly communicated the multitude and infinite size of space that is hardly conceivable for humankind, the astonishing dynamics of galaxies and planets. This wake-up call made every participant feel »small« in a pleasant way and allowed them to experience our world as much less significant and threatening. There followed a the opportunity to gaze into the night time sky through telescopes on the roof of the Maritim hotel, letting the experience sink in.

Being small, or even being a child, was certainly one of the many VUCA resilience strategies that were ready to be taken home from SOPHPIA. We as private individuals and in business can not only survive but even live and use VUCA if we every now and then approach problems and tasks like children with an empty slate and without a defined goal by simply getting up again after each failure and trying again with a new tactic; discarding successful approaches as soon as they begin to crumble; not hesitating to use the abundance around us in order to play, experiment and eventually produce. After the work was done, the SOPHIA participants walked to »Cologne’s best ice-cream parlour« quite deliberately without a defined purpose, but with a brand new wind-up toy in their pockets, enjoyed their final shared moments and then returned to »real« life strengthened for a world of VUCA that might not always be so serious after all.