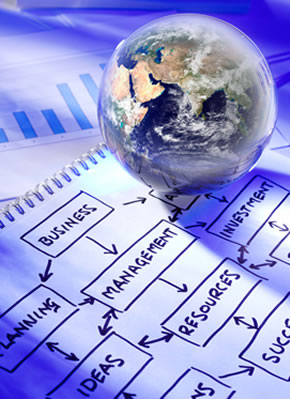 Criteria for a Successful Transformation (Part 1)

Everyone knows that an organization’s viability for the future is decided by its ability to react and adapt to fast and fundamental changes to its conditions.

Many know how organizations can be modernized, transformed or »reinvented«; many know how to develop a vision full of meaning and significance, how to initiate personal responsibility and establish a culture shaped by trust – the basis for creativity, innovation, speed and agility.

Few recognize their organization as potential, a living organism with a proper soul and intention to unfold its mission in the world.

Finally, some businesses have really created organizations for a modern age that is viable for the future, that meet the requirements of the people and our shared environment on the earth.

The businesses of a modern age viable for the future are said to have attributes like an integral use for all stakeholders, a significant and emotionally binding object of the venture, sustainability, creativity, innovation, personal responsibility, teams that know how to lead themselves, a comprehensive approach, modern spatial concepts and flexible use of time, networked working and direct communication terrifically supported and shaped by digital technology, lean, speed and agility – in different degrees and combinations.

Different groups of companies are dominantly named in current discussions on New Leadership – New Organizations. One the one hand, the cult enterprises keep cropping up, including Apple, Google, Amazon, Facebook, which are all at the very top of the list of most admired companies (Hay Group/Fortune). On the other hand, we keep hearing from the sustainably successful classics, such as Gore, Semco, Morning Star, dm – drogeriemarkt, and the »Teal Organizations«, that have been celebrated in recent literature, e.g., FAVI and Buurtzorg. Finally, we come across initiatives like the team WIKISPEED – a car manufacture that started as a single project with volunteers only and has the potential to revolutionize the entire automobile industry.

A company like Facebook, which has only been active since 2004, develops its culture without being tied into a long company history. It develops this culture together with similarly minded digital natives in order to fulfill its mission to give people the potential to communicate, to make the world more open and to connect.

Personalities like Steve Jobs, Larry Page, Jeff Bezos and Mark Zuckerberg for the American cult ventures and Wilbert Lee »Bill« and Genevieve Gore, Ricardo Semler, Chris J. Rufer, Götz W. Werner for the classics, as well as Jean Francois Zobrist, Jos de Blok and Joe Justice are integral to the individuality and mission of their organizations, their companies.

It is clear that founders give a company its soul. For example, the attitudes and convictions of Bill and Genevieve Gore still shape the culture of their company. They established their business in 1958 and initially operated from the basement of their private house. By now, there are 10,000 associates worldwide in a flat organizational structure without an instructive hierarchy who work with technological innovation and success in multi-disciplinary teams. They do so in manageable business units in order to ensure direct communication. »No ranks, not titles« is alive, even though today’s actual business cards do bear titles, like »Global Leader« for a given division and others. The sustainable success of the company is greatly supported by the strong reduction in hierarchical culture and one-on-one communication at eye level by Gore. These same factors can, however, also limit the company, for example when Gore expands into other countries, such as China, where a stronger hierarchical orientation is culturally ingrained.

Joe Justice emerged in 2008 as the founder of a new generation, when he established his Team WIKISPEED as an organization that grew out of a blog about a technologically exciting challenge. One of this organization’s founding elements is utterly voluntary participation.

In 2008, he participated in the »Progressive Automotive XPrice« competition and gained shared tenth place in this global competition against the giants of the automobile industry. Prize money of 10 million US Dollars was awarded in this initiative supported by the US Department of Energy. Competitors had to meet the challenge of building a car that was able to travel for 100 miles (160.9 kilometers) in real traffic conditions on one gallon (approx. 3.8 l) of fuel.

He began alone and reported his progress and obstacles in a blog. This way, he found 44 volunteers in four countries, who worked together to create a prototype for the competition within three months. Team WIKISPEED achieved a »sensational« development cycle of seven days, where the traditional automobile industry takes years. Joe named three enablers for this incredible speed: Agile, Lean and Scrum.

Development takes place in modules in separate teams. Every task is completed in pairs, so that knowledge is shared on the spot and time-consuming training can be avoided. All programs and tools that are used, which did not even exist ten years ago, are »open source«.

Use of material is kept to a minimum and waste is avoided. Visualizations of the processes immediately reveal inefficiencies and allow for their removal. The use of the project framework Scrum, which has proved itself in software development, made it possible to be stunningly fast in the development of an automobile prototype.

Team WIKISPEED now has 1000 members in twenty countries, building and selling cars. All participants provide their work and knowledge free of charge; any attained profit is distributed among the community.

With his passion and the belief that it is possible to achieve decidedly more environmentally viable mobility, Joe Justice found similarly minded people. The realization of a cooperation that relies on »sharing«, the digital options applied to permanently connect the scattered teams and ensure exchange as well as the transmission of methods and tools from software development to traditional heavy industry are elements of this rapid success. However, a public call for support suggests that Team WIKISPEED has reached its limits and that the community will have to provide new impulses in order to continue its success story. Environmental awareness, passion, volunteering, knowledge sharing: these are the striking features of a new generation of founders. The consistent application of freely available tools and agile working with lean concepts and the SCRUM project framework are the striking elements of equivalent modern organizations. Joe Justice is striving for his model to also be put to use in finding solutions for great issues of society such as tackling epidemic disease.

How, though, can traditional, hierarchical companies be modernized: companies which were not placed into a New Era by their founder and entrepreneur, but which have a long history and were established at a different time into completely different conditions?

FAVI is a successful subcontractor and automotive supplier. The company was established in 1957. In 1980, Jean-Francois Zobrist attained the post of »directeur général«; he would remain in this responsible position for 29 years. FAVI was successfully transformed to provide toom for personal responsibility, ownership and a comprehensive concept as described by Frederic Laloux in his inspiring book: Reeinventing Organizations, A Guide to creating Organizations inspired by the next stage of human consciousness (Brüssel 2014).

Zobrist faced a company with five hierarchical levels and many processes and functions, mechanisms that were exclusively concerned with employee control. Zobrist spent some months attempting to prepare his leadership team for changes, experiencing vehement resistance.

For nine months after he had taken over the management, he visited the production line every day, spoke to every one, asked many questions, but was also glad to answer all questions put to him; he tried to take his managers with him on his journey of modernization, but did not succeed. Then, he addressed his entire work force. He shared his conviction that the way in which the people in the factory were managed and controlled is unworthy and his belief that they deserved a different treatment, that they deserved trust. He announced concrete changes, including the removal of clocking, adaptations of the salary system to fixed salaries, opening the store and trusting that every one will take what they need for their task as well as the abolition of a separate canteen for managers.

He acknowledged that he himself did not know the exact shape that operative work should take in the future and invited every member of his audience to take part: »I suggest that together we learn by doing, with good intentions, common sense, and in good faith.« (Zobrist, La belle histoire de FAVI, p.38, cited in Laloux Frederic, Reeinventing organizations, p.273)

The managers opposed these changes vehemently. Zobrist made it perfectly clear that he was not going to go back on any of his decisions, but confronted them with the next step of transformation: the introduction of self-leading teams. As this meant that there would be no more management positions, he gave »security in insecurity« to his managers: Nobody will be let go! There will be no salary cuts!

Everyone was challenged to take a look around and find or create a meaningful role. Once he had abolished management roles and introduced personal responsibility, Zobrist gave no further orders, but invited the employees to develop sensible solutions, an expedient structure without hierarchy and practicable methods of operation.

Zobrist had gained a lot of trust as a person during the first months and all the measures he introduced reflected this value in the entire organization. In this case, a credible, initiative personality successfully transformed an existing organization and gave a new soul to a company. Yet, we do have to acknowledge the fact that FAVI is a company with 400 employees in one single location.

The examples above sketch out three initial criteria for successful transformations and radical renewals of a company.

It is intriguing to see whether traditional large-scale enterprises are able to fulfill these conditions.

There remains one prevailing question: How will it be possible to pick up on and realize these keys to success for a radical modernization in such a way that they can even be applied to traditional and hierarchical companies with complex structures, power functions that are divided and subject to temporal limits, and a long history?