Pirate Leadership: A Dramatic Appeal for Self-Organization in Business 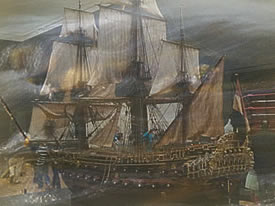 It is the early 1800s. The British warship HMS Surprise is about to engage the enemy. The crew are all preparing below deck. The portholeopens and the captain climbs down in order to commit his men to the sea battle with the French privateer Acheron:

»Right lads (…)! (…) discipline will count just as much as courage. The Acheron is a tough nut to crack: more than twice our guns, more than twice our numbers, and they will sell their lives dearly. Topmen, your handling of the sheets to be lubberly and un-navy like. Until the signal calls, you’re to spill the wind from our sails, this will bring us almost to a complete stop. Gun crews, you must run out and tie down in double quick time. With the rear wheels removed, you’ve gained elevation. And without recoil, there’ll be no chance for re-load, so gun captains, that gives you one shot from the lardboard battery … one shot only. You’ll fire for her mainmast. Much will depend on your accuracy (…). Captain Howard and the marines will sweep their weather deck with swivel gun and musket fire from the tops. They’ll try and even the odds for us before we board. (…) So it’s every hand to his rope or gun, quick’s the word and sharp’s the action.«

Cut to a different scene: Same epoch, same situation, but a few more ships: A collection of vessels from all over the world are facing a united enemy armada. On the Black Pearl, the captain is preparing the crew for sea battle, as above, calling out at them from atop the railing:

»Then what shall we die for? You will listen to me! LISTEN! The other ships will still be looking to us, to the Black Pearl, to lead, and what will they see? Frightened bilgerats aboard a derelict ship? No, no they will see free men and freedom! And what the enemy will see, they will see the flash of our cannons, and they will hear the ringing of our swords, and they will know what we can do! By the sweat of our brow and the strength of our backs and the courage in our hearts! Gentlemen, hoist the colours!«

One of the crew responds with the call »Hoist the colours!«, then two, then all on board. The call spreads to the other ships – Chinese, Indian, French, African – and the colours are hoisted on the masts …

In the first scene, it is the Union Jack flying from the mast. The colours hoisted in the second scene show the Jolly Roger. Both examples are fictional, not historical. They are from blockbuster films: The first captain is Jack Aubrey from the film Master and Commander. The second is Elisabeth, a courageous woman who leads the Pirates of the Caribbean in the film’s showdown. Although these speeches were never actually given in that form in real life, they are paradigmatic for two juxtaposing philosophies of leadership and organisational models: Navy Command vs. Pirate Leadership.

The navy captain has already decided for himself how the battle ahead will be won. He is a brilliant commander and has designed an intelligent plan down to the last detail. His crew is divided into functions and is highly specialised. They are given precise orders, in jargon, telling them who will have to do what and when. The captain can trust that his order will not be questioned by anyone and that everyone will enact his plan to the best of their abilities. He is the boss: the most competent problem solver, the lone decision-maker, the clear giver of orders …

What does Elisabeth do, on the other hand? She merely appeals to her men’s freedom and demands that they all give their full commitment. She leaves the decisions of how the battle will be won to each individual member of the crew. She trusts that each of them will do exactly what they consider the right thing to do in the challenging battle ahead: that collective swarm intelligence will be superior to the enemy’s military command. Elisabeth’s efficacy as a Pirate Leader is not established until the first followers attest their commitment by giving their agreement. Then, their call spreads like wildfire and catches in the other units …

It is easy to draw an accepted parallel between the military and business. Too many words that are used in the economy recall the model function of the military (consider the origins of words like chief officer, strategy, tactic, etc.). It could be more difficult to position the historical pirates as a model for successful leadership. They are usually perceived as an uncontrolled and uncontrollable horde brought together from far and wide by coincidence, who contravene all rules and break the laws to terrorize the seas and caper trade ships with cruelty and no holds barred.

I am not about to legitimize and qualify the illegality of piracy. I do, however, believe that even centuries ago, the pirates created a historical model for successful self-organization with the leadership philosophy outlined above. The economist Peter Leeson has addressed the economic and social organisation among pirates in detail. In the Journal of Political Economy, he concludes that pirates developed »one of the most sophisticated and successful criminal organisations of history«.

Pirates were not at all a chaotic mob, after all. They did have a functioning organization. It rested on a few fundamental rules and a very large degree of self-organization. Thomas Häusler says that the »enemies of humanity«, as they were called by the official authorities, were in fact »true friends of democracy«. That is probably one of the reasons they were pursued without mercy in the absolutist age. The pirate crews elected their captain – for a period of time. It was possible to replace leaders at any time, for example if they proved to be too autocratic or cowardly. The captain only enjoyed absolute authority during attacks. The only other leadership position next to the captain was that of the quartermaster; no other hierarchies were in place.

A few basic prohibitions ensured order: hard punishments were doled out for violence against crew members, theft within the crew, cowardice in battle and gambling for money. The pirates’ codes, which every member had to swear on, often guaranteed that prisoners would be treated well and women respected. They regulated the distribution of the bounty and guaranteed social securities: The pirates had a balanced wage scale, with the captain getting no more than double and the quartermaster no more than one and a half times the share of the bounty as any other member of the crew. Compare that with modern-day CEO wages, which might be as much as 300 times that of the employees! Whoever was injured or even rendered invalid in battle was given a generous compensation and therefore good security. At the same time when the crews on trade ships were given short shrift, subjected to hard drills and maltreatment, the pirates therefore established a »democratic counter-model to the autocratic trade marines« (according to Häusler). It is not for nothing that so many marines defected to the pirates, even at the risk of being pursued by the state as outlaws.

I repeat: I am not calling for lawlessness and breach of compliance in organizations! But I do want to encourage to learn from the historical facts of the pirate era. As I see it – to put it bluntly – too many organizations and departments are nowadays still being managed like marine ships and are casting away a great amount of potential that could by salvaged with Pirate Leadership: especially so in the uncertain navigable waters of the VUCA world.

By now, the first organizations are courageous enough to give Pirate Leadership a try, with democratising structures, consistent self-organization and support for freedom of decision-making on all levels. Brian M. Carney and Isaac Getz published their book Freedom, Inc. in 2009, coining the apt and provocative term of liberated companies. Frederic Laloux offered a very impressive documentation of the potential that can be realized in self-organization in the 360 inspiring pages of his recent, pioneering book Reinventing Organizations (2014). This former McKinsey associate partner provides a detailed analysis of twelve organizations from a range of fields, countries and contexts (with as many as 40.000 employees!) and documents how the abolition of excessive hierarchy and a switch to self-organization can achieve stunning effects.

For example: The Dutch healthcare organization Buurtzorg was able to reduce the care effort per client by 40% (!) by switching to self-organized nursing teams. Ernst & Young estimate a savings potential of approximately two billion Euro if this model was adopted throughout Holland.

It has been argued that this is not possible beyond the NGO sector. The French automotive supplier FAVI has refuted that point: while all of their rivals have by now moved their production to China due to the lower wage costs, FAVI is the only manufacturer of shift forks to remain in Europe, with a market share of 50 percent. The product quality delivered by FAVI is described as »legendary«, their punctuality of delivery is considered »mythical« (not a single order has been delivered late in the last 25 years). FAVI attains high profit margins every year amid aggressive competition from Chinese rival suppliers, pays wages that are clearly above the average and does not suffer employee turnover. Laloux argues that this and other achievements are due to the radical realization of self-management in the organization. Down to the assembly line, the FAVI employees direct, manage and organize themselves in small teams (known as mini-factories), without a declared manager.

A film has recently been doing the rounds on the net: Augenhöhe (a version with English subtitles is available on the site.). It presents more organizations that value self-determination and real participation – successfully so. In February and March, the TV channel arte gave several showings of the wonderful documentation Mein wunderbarer Arbeitsplatz (unfortunately only available in French and German). Like the pirate leader Elisabeth above, the leaders of organisations in this film appeal to the »free men (… and women) and freedom« in the organization.

The organizations in the films and books above that are managed in the spirit of Pirate Leadership show that the focus on self-organization and freedom of decision pay off. Beyond that, most of the people featured in the portraits confirm that they never want to work differently again. This must be another key to the potential that Rüdiger Müngersdorff addressed in his last blog contribution. If, as surveys say, only twenty percent of employees are really motivated, how great is the room for development in an organization in order to win the remaining eighty percent?

With a bit more pathos, we might say that whoever has tasted the freedom of a pirate’s life will not want to return to a marine ship. That notion will strike fear into the bones of many managers. Yet I am convinced that this is in fact the very opportunity for organizations. The quote ascribed to the much-adored and highly successful Steve Jobs is no coincidence: »It’s more fun to be a pirate than to join the navy!«