Simply not good enough: The perpetual message of insufficiency 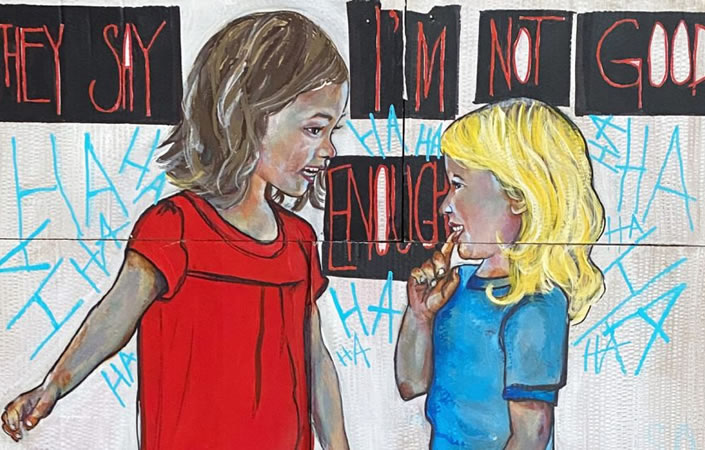 When Arnold Gehlen described humans as insufficient creatures, he furnished this label with a positive interpretation. The human ability to design our life world grows out of the physical insufficiency of humankind, essentially establishing a dominance within it and an ability fashion it out of the very needs of that insufficiency. This anthropological approach is juxtaposed by a psychological definition of insufficiency in the ontogenetic development of humans with messages that communicate to the individual: You are not good enough! In this case, the state of insufficiency is often frozen in time, arrested without achieving the turn toward design, domination and overcoming. The messages of lack result in resignation, doubt, giving up or an eternal fight against the power of the early messages.

Messages of insufficiency are part of our societies’ cultural attitudes. They play an important role in families. In biography-based work that addresses the proverbs children and young people remember having often, time and again, heard from important attachment figures, it becomes apparent how these messages evolve into attitudes and tenets. ‚Life‘s no picnic‘, ‚No pain, no gain‘ or the at first sight less threatening ‚No sweet without sweat‘: they all convey the same message, namely that the recipients are not good enough, need to deliver more, pull themselves together. The world is not a place of experience and blissful design, it takes the shape of a permanent practical test. There are indeed also messages of power, fulfilment and an awareness of one’s own potential. While both facets are there, the balance is often not right.

This missing balance that is so frequently encountered is often met with the recommendation to form formulaic positive resolutions. Although this can have a positive and stabilizing effect on individuals, it is clearly not enough.

Mindset work as realized by MyndLeap addresses the phenomenon where culture, collective mindsets and individual mindsets meet and develop particular dynamics. Any work that focuses only on the individual and that individual‘s belief systems will not alter the ties between such normative cultural messages and the individual’s related tenets.

Ideally, these very ties will reveal differences and thereby open up a space where an altered narrative can emerge. This altered narrative sees that mistakes are elements of innovation and can thereby change the perfectionist norm so that individuals can find a space in which to fashion their own designs, interacting between the fields of ‚I can do it‘ and ‚I am not good enough‘. The narrative that mistakes are an integral part of the process of learning and growing is still strongly juxtaposed by the narrative that mistakes are wrong in themselves, must be avoided and constitute a nigh-on moral failure. There is often a mutually reinforcing symmetrical relationship between collective and individual tenets. This relationship can unfold a great reciprocal power where the belief systems communicate safety, the ability to design, courage and the joy of a challenge. The opposite is true, however, when tenets of insufficiency reciprocally reinforce each other.

Looking back at the origin of the mindset concept, it becomes apparent once more that it really addresses specific assumptions towards the world that are inherent to social systems and predate any concrete experience. It began by focussing on social classes and moved on from there to the investigation of whether there are typical national mentalities. The pivotal question for us today is in what way the mentality or the dominant collective mindset have a significant effect on the enthusiasm and the ability to perform among company employees. While individual mindset work can be a relief for each individual and often shows a path out of a situation that stabilizes and reinforces a person‘s own awareness of their insufficiency, organizations must tap into the collective mindset here. This is the lever for change. There are tried and tested methods that permit groups as well as larger organizations to work in such a way that it is immediately apparent how the collective mindset works and which normative messages it sets. The individual beliefs work within those normative messages. As soon as the connections are made apparent, it is possible to begin a process that lets in other messages and eventually makes them effective by sustainable, mindful awareness and integration. Cultural patterns establish themselves by repetition, modelling and imitation. The work on the collective mindset as designed by Myndleap leads from an awareness of insufficiency to an awareness of potential. It can therefore tap into a culture of potential within which each person can take it into their own hands what to make of that potential.