The Return of the Crowd 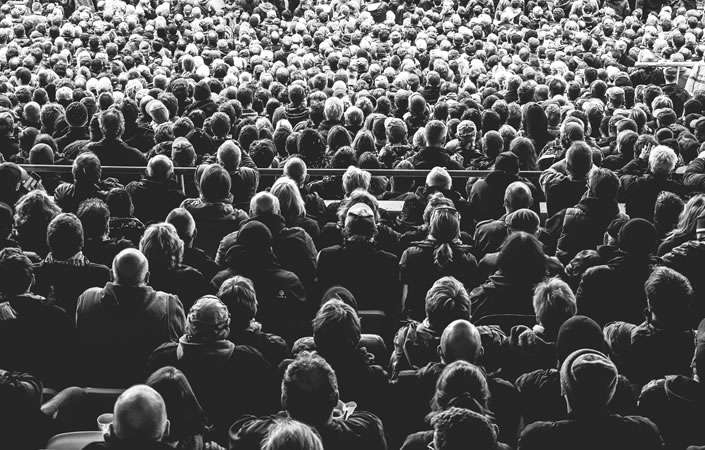 The phenomenon of the crowd became the focus of theoretical thinking in the beginning of the last century. Beginning from Gustave Le Bon’s theories, Elias Canetti, Hermann Broch and Sigmund Freud were among those who addressed this new fact in politics and society. Even then, the crowd was already posited against a strong trend for individualism. Most writers on the topic are primarily concerned with crowds being directed by emotion, appearing unreasonable or even against reason. Canetti adopts a more ambivalent stance, as illustrated by this quote:

»There is nothing that man fears more than the touch of the unknown. (…) It is only in a crowd that man can become free of this fear of being touched.«

Being freed thus comes at a price: individuality and differentiation are wiped out.

The turn towards individualism was opposed by national-conservatives and later on especially by the Fascist movements. History had opened an opportunity to choose individual life designs, to live difference; that apparently roused that fear of the unknown that Canetti had addressed. When the NSDAP was elected in Germany, the liberal project of freedom was put to an end. Crowds gathering to be addressed, staged aesthetic productions visibly completed the process of de-individualization. This movement was supported by a new medium: it is unlikely to have been a coincidence that the mass medium radio was given the German name Volksempfänger – the people’s receiver.

How about now, in the early new twenties? A message to facebook, instagram or any other social network – a friendly automated answer: »thanks for sharing«. Whatever you may have individually or specifically said or wanted is irrelevant, your individual voice doesn’t count. The network won’t pay attention until you are part of a socially, economically or politically relevant cohort. The network won’t notice you, it will only notice the forming crowd. That is when it reacts: you are not there, you are only of interest as part of the crowd.

In contrast to their propaganda that social media provide a space for the expression of each individual, they are where we see the very opposite: a process of de-individualization. Only the crowd and its staged production is of relevance. Digitalization has become the tool of a development that endangers the hard path Europe walked to win individual freedom; it lets humans become a manipulatable crowd again. Like during the early decades of the last century, there is an opposition to the trend of a liberal, individualist outlook that is especially prevalent in the metropolitan regions, and this opposition is supported or even enabled by the technological potential of digitalization and social networks.

The system of social networks, whose community standards are guided mostly by conservative, evangelical and American »values«, is supported by a large network of informants. Posts abound with calls to report something or other that might contravene standards, which incidentally are quite vague. There is a depressing parallel to the block warden snooping in German cities and communities during the Nazi era. Back then, these standards were termed »good manners« or even »the people’s will«.

In the midst of this development, the naturally splintered, liberal and individualistically guided forces are helpless, for how can individualism be formed into a relevant crowd? In the democratic primaries, the more liberal candidates are not defeated by the crowd of right-wing conservatives, but are thwarted by their own voters, unable as they are to cover every single one of the highly diverse concerns.

The new twenties will be facing the task of teaching digitalization to do individualism, and it will be a great challenge to join together as a liberal community of individuals, finding a way out of a process of self-destruction.