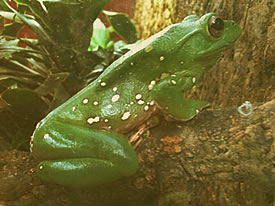 Two frogs fall into a bowl of cream. Its insides are smooth. They cannot climb out. One frog succumbs to his fate, sinks to the bottom and dies.

The other frog kicks and kicks with all his might, his will and his stamina. He does so for a long time. And suddenly he notices something solid forming underneath his feet. With renewed hope, he keeps kicking until he finds himself sitting on a heap of butter and leaps out of the bowl. The moral: never give up, keep trying, have a will, fight and you will reap your reward. (But we never find out what happened to the wilfully struggling frog in the end.)

This European fable is often told during leadership seminars.

How is the same fable told in an Asian country with Buddhist traditions?

Two frogs fall into a bowl of cream. Its insides are smooth. They cannot climb out. One frog struggles, kicks with all his might, wants to get out of the bowl, wants to get back up to the edge. He exhausts himself and eventually he weakens, sinks to the bottom and dies.

The other frog moves calmly in order to stay on the surface, perceives his surroundings and what is inside him. After a while he closes his eyes and peacefully sinks to the bottom. He opens his eyes and is sitting on the tabletop: the bowl had cracked. An illusion had disappeared. The moral: Trust in what happens, stay calm and what needs to be solved will be resolved.

Which version will we tell in which situation?