»Empower and trust your people and you will be positively surprised!« – Example of a bottom-up-process 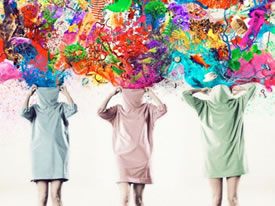 Imagine you are an employee in a medium-sized business with a history. You are well connected within your organization, are considered creative or you are committed – ideally you are even all three of those things. You are still several levels from the top of the company hierarchy and at this point you are certainly not at the forefront of important, strategic projects.

One day, you and several other colleagues receive an offer from the management team: If you want to and feel ready for it, you are invited to incite »bottom-up« changes in the company, to think important topics »out of the box« and bring them forward on your own initiative. This approach is supposed to contribute to enlivening and fostering the dynamic of the company culture in the context of a long-term strategic (re-)orientation. It is the hoped that this will be the way to new, future achievements and a continuation of a successful company history. In practice, you will be able to chose a topic during the kick-off event – depending on personal interest and inclination. This topic would then be yours to work on freely and on your own responsibility. There will be no additional payment, special time budget or any other resources made available to you in any official way. A mentor from the management team will be available to you for support, plus there will be an offer of optional coachings and supervisions.

Well? Does that sound tempting to you, somewhat strange, fairly unclear or somehow exclusive and exciting? Are you maybe asking yourself why you of all people – the person described above – were invited, and what will happen if you fail to take up the offer? On the other hand: how serious is the management team about this? Of course also: How are you supposed to handle this on top of your existing workload?

These and many other questions were posed by the bridge people who had been invited to the kick-off event. All of the almost thirty employees who had been contacted followed the invitation and only two of them left in the course of the process – for a reason and obviously without negative consequences for themselves but rather as living proof that this was perfectly possible. The entire idea was based on voluntariness.

Let’s return to the kick-off event. At this event, it was very important, especially at the very beginning, that the entire management team was present as a visible sign of the value and relevance awarded to the issue. Furthermore, the managers showed a great commitment to the idea and supported the aims of the initiative fully and very credibly. In order to make this possible, the team had sufficient time and opportunity to discuss and address the issue in advance. The two days that were taken for the kick-off event itself were no less important. They made it possible for the selected employees to address the topics themselves as well as deal with themselves as individuals and as a newly created group or community. Thus, most of the participants were enthused for the process they were facing, even if they had originally still been hesitant. Interactive, dialogue-oriented and emotionalizing elements as a frame as well as an agenda that was adapted to the immediate needs of the group contributed their part.

Then there followed a period of just under two months to develop ideas, pin down, adapt and work on the chosen topics, develop the group, engage and involve further colleagues, etc. The mentors chosen by the given initiatives themselves had the primary role of suppressing the typical management reflex during this time: neither taking responsibility, directing, probing or controlling, nor taking decisions for the initiative that could be taken by the group itself. The mentors were only supposed to offer support as a coach where required, as soon as the initiative’s ability to act was in danger. As the need was rarely voiced, this was on the one hand a simple task for most mentors, on the other hand there emerged uncertainty whether that was to be taken as a good or a bad sign. Quite understandable! All in all, several managers experienced this mentoring role as throughly new and unusual and therefore a personal challenge.

The first review workshop luckily showed that the trust, reticence and letting go had been justified and that most of the individual initiatives were »on track«. Despite a few difficulties, the employees were also still motivated. Upon questioning, and not really surprisingly, the greatest challenge had been to find the time for this additional task. One participant, however, added quite pragmatically that all initiatives had, though, delivered good interim results, after all. Quite! With the help of cooperative advice, several participants were able to receive specific support from colleagues and therefore profit from the knowledge and experience of the bridge people community. From the point of view of the process, it was particularly important that the individual members and groups were able to see each other as part of a committed and lively community on this day.

There followed a period of approximately three months to develop the own topics further. This time, the development was coupled with the task of establishing a decision memo for the second review workshop, which would then be used by the management team for their decision on what was to happen in each individual initiative in the future.

Unsurprisingly, curiosity once again rose among the management team in advance of the second review workshop: what will the outcome be? How hard or easy will it be to take the necessary decisions and what will we be facing with those decisions? Will we be able to consider the process so far a success? What will the bridge people think?

As soon as the workshop began, one thing became clear straight away: since the space for exhibition material ran out in no time, there was obviously no lack of commitment and motivation. The presentation of the results and the decisions to be made included creatively designed video statements (by two members who were unable to attend), functioning prototypes of potential new products, results of a comprehensive, Europe-wide questionnaire among colleagues on the topic of CSR, detailed process analyses, etc. One initiative had furthermore created stickers bearing the overall initiative’s logo and brought them as a present for everyone – this idea had, incidentally, emerged during the first review workshop.

All in all, the degree of commitment of show as well as the range and variety of results still had the power to surprise. Therefore, the voting (during which all attending participants had to vote for their own five top initiatives, results or suggestions) was not an easy task for most. Eventually, the management team entered the decisive round, taking the result of this voting with them, took the necessary decisions, passed resolutions on the future approach and presented these to the assembled community. Certain topics were to be passed on to the responsible line management, some were to be continued as classic projects, yet others in a more free form in what was called a »joker team«. Some groups were asked to make their suggestions more concrete or work them out further. Some were also rejected, with an appropriate justification. Participants had already announced in advance that »I will continue by topic anyway, even if I don’t (yet) get a ›GO‹ from the management team!« or that »If my topic will not get the green light, I can switch to one of the other initiatives!«. Yes, wonderful! This is the sort of ownership and commitment that organization developers and others like to see; after all, it is an essential condition for an enlivened and more dynamic company.

The CEO’s closing words at the end of the second review essentially remain a fitting conclusion:

It is amazing and very positively surprising what is possible in a short time. We trusted our people that they will do the right thing, we gave them the necessary space and let them do their thing. That fostered potentials.