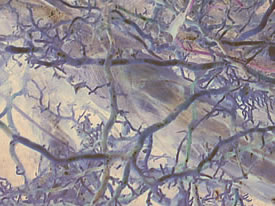 Make rhizomes, not roots, never plant! (…)
Don’t be one of multiple, be multiplicities! (…)
Be quick, even while standing still! (…)
Don’t bring out the General in you!

The psychiatrist Félix Guattari and the philosopher Gilles Deleuze formed this imperative in their cryptic 1980 mammoth oeuvre A Thousand Plateaus, which is one of the most important reference works of contemporary philosophy today.

I recently outlined the concept of VUCA on this blog; it describes an increasingly virulent challenge in business that has recently been a frequent topic of discussion. In another contribution, I looked to China and introduced an alternative strategic approach that may be more adequate for handling VUCA. In this contribution, I will address the question of what defines a VUCA resilient organization.

Even though philosophy is frequently regarded a view from the ivory tower, it can often serve as a seismograph for the future issues of the real world. Positioned at the avant-garde as it is, philosophy often (unknowingly) seeks the answers for the challenges of tomorrow’s business world. Following on from this hypothesis, I will test the above quotation for its uses with regard to successfully handling VUCA today.

Deleuze and Guattari used an analogy from botany to differentiate between two different approaches and types of organization: root versus rhizome.

The root: An organization devoted to root thinking always forms a clear structure and hierarchy. It has a centre and is constructed for the long term. I grows vertically: like a tree whose root strands grow together into a central trunk, this organization directs all its function lines towards the top leadership. A root system cannot be divided, as each root strand is necessary for the survival of the next. When a tree is severed at a given point, all branches connected to that point will die – in the worst case that will be the entire tree. In the same way, individual parts of a root organization cannot exist independently from the centre and the other function. Root thinking is always focussed on the original source, stable existence, steady status and the proper entity.

Deleuze and Guattari contrast this with another, less well-known, botanical form of life:

The rhizome: Rhizomes are growths with a so-called stem system. While root, stem and fruit can clearly be differentiated in most plants, rhizomes grow as systems of root stems in which there is no difference between shoot and root. The bamboo, ginger and the ground elder are well known examples of rhizomes. Their reproduction is vegetative and thus easy and fast: their wide-spread subterranean creeping allows new shoots to emerge over ground at the most unexpected places. A rhizomatically oriented organization is accordingly focussed on a widely cast network of relationships that connects all its members. It does not have a centre, not least because its stability is momentary and given only for each situation. An organization rhizome is subject to constant change, continuous restructuring, displays extremely fast and horizontal growth. As it consists of individual parts that can constantly re-connect in new constellations, a rhizome can be severed at any time and any place: it will react immediately and restructure into a form that can continue to survive. Rhizome organizations are focussed on their potential, understand themselves to be in constant flux, concentrate on action and becoming and celebrate their multiplicity and heterogeneity.

How does this connect with our business world in its VUCA state of emergency? Organizational anthroplogy and business culture research have long pleaded for attention to be paid to the implicit rules in the informal business culture next to official business structures, hierarchies and processes. These implicit rules are usually formed informally, such as in old boys’ networks, in water-cooler chats, while gossiping at the photocopier, talking during a cigarette break or over lunch at the canteen table. Here we see the hidden rhizome in business culture at play; frequently, it will be at odds with the official root hierarchy. Organizational anthropology has advertised the potential inherent in a public and conscious discussion of the subconsciously active, implicit rhizome rules in organizations.

Against the backdrop of VUCA discussions, we can go even one step further by proposing the following hypothesis: When Deleuze and Guattari created their rhizome image over thirty years ago, they suggested a mindset and organizational philosophy that makes it possible to react better to volatility, uncertainty, complexity and ambiguity. As rhizomes are by definition in constant flux, they are much better able to adapt than roots are. They are more agile. A rhizomatic network of relationships is basically interactive and uses swarm intelligence, thus profiting from its own heterogeneity and complexity. Networks always communicate in a rhizomatic manner: messages spread at a speed that could never be reached in a hierarchy. Such viral communication can prove faster, more effective and more suited to reaction than communication that passes along the »official« channels. A rhizomatic organism that contains and maintains multiplicity within itself reacts to ambiguity with much greater tolerance and sovereignty than a closed, homogeneous unit that knows only one path.

The idea of the rhizome allows us to imagine an organization as a living organism. This precisely matches the pleas made by the new approaches of business oriented organizational development that have recently been published:

Connected Company: In 2012, Dave Gray contrasted the Divided Company and the Connected Company: The former is defined by hierarchy, division of labour, specialisation, stability and predictability in stable environments. The latter is distinguished by holarchy (holistic independence of the parts), fractal work units, autonomy, flexibility and adaptiveness in uncertain environments. The Connected Company consists of a service-oriented platform that does not direct the so-called pods, but optimally supports them in their independent (but connected) customer-focussed actions.

Light Footprint Organization: Charles-Edouard Bouée outlined the Light Footprint Organization also as recently as 2013. This organization is able to optimally adapt to its fast changing environment and the fluidity of events by being set up as a modular loose alliance of largely autonomous, multi-disciplinary teams. Here, Bouée has issued a plea for more decentralization, pragmatism, opportunism and openness for experiments. Well-trained and optimally equipped small and agile teams that cooperate intensively according to their paradigm of reciprocity: This, he says, are the guarantors of success for businesses that have a future in the VUCA world.

Dual Operating System: John Kotter’s book XLR8 (Accelerate, 2014) is only a few days old: in it, Kotter considers how organizations can withstand the continuous acceleration of the VUCA situation. He sketches a Dual Operating System, which relies on the speed, adaptability and innovative potential of networks in organizations next to the safeguarding, stable and reliable hierarchy. Kotter hopes that well-connected change agents will provide businesses with a greater willingness to change and ability to adapt.

These five examples from the current discourse on organizational development show the potential of philosophy (and other avant-garde disciplines on the margins such as, e.g., contemporary art) for successfully handling VUCA. Translating the opening quotation by Deleuze and Guattari into the context of business (in presumption of approval by the organizational developers cited above), it may read:

»Network integration, diversity, agility as well as the reduction of authoritative structures and mindsets are the most important keys for a VUCA resilient organization!«