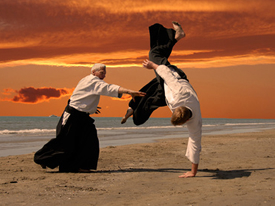 If your heart is large enough to embrace
your adversaries, you can see right
through them and avoid their attacks
(Ueshiba Morihei, Founder of Aikido)

In previous contributions to the series »Handling VUCA«, I sketched out what VUCA means to then go on to present concrete alternatives in terms of strategy, form of organization and teamwork. As an intermediary summary, this post will put up for debate which fundamental stances make resilience and sovereignty possible in a VUCA situation.

It should be understood at the outset that the concept of VUCA must not under any circumstances be abused as an excuse for a »self-inflicted« situation. Every manager and every employee ought to reflect on the question of what their active part has been in creating the VUCA nature of the situation. Subsequently, one can go on to ask where and how volatility can be transformed (back) into stability, uncertainty into certainty, complexity into simplicity and ambiguity into clarity.

There are many areas in work and life, however, where VUCA cannot be transformed (back). In order to retain the ability to act in these situations, you have to respond to VUCA with integration: If I cannot actively change the situation, I can still »embrace« it. This stance allows an escape route out of victimhood in a VUCA situation. VUCA is simply »de-problematized«.

In one of my first blog contributions, I referred to the Italian philosopher Giorgio Agamben in order to reflect on the situation of businesses as a »state of emergency«: the characteristics of this state are exactly the same as those of a situation that would be described as VUCA. In the same contribution, I introduced the artist and cultural philosopher Yana Milev, whose »emergency design« proposes that the most promising answers to the state of emergency are spontaneity, situational action and creativity. Among other things, she advocates the idea of setting up an emergency design according to the principles of Aikido. I want to take up Milev’s idea (which she proposed in a socio-political context) and use it for the VUCA context in business. What would a successful Aikido reaction look like in an organization?

As mentioned above: Our usual reactions to volatility, uncertainty, complexity and ambiguity always aim to re-establish stability, certainty, simplicity and clarity. However, it is increasingly frequent that this »warfare strategy« proves useless. VUCA-AIKIDO, on the other hand, does not even attempt to re-establish the old situation: it aims for a flowing, balanced harmony (AI) between energy (KI) and the way (DO). The Japanese martial artist Ueshiba Morihei developed Aikido in the early 20th century as a decidedly defensive martial art. Its overall aim is not victory over the enemy, but to establish defense and protection without an offensive attack. The Aikido fighter initially aims to direct the attacker’s force away in order not to be hit. Then, that very force is redirected and used against that same enemy: the enemy is essentially neutralized with his or her own force. In analogy, VUCA AIKIDO is about positioning yourself in such a way that volatility, uncertainty, complexity and ambiguity cannot hit you. In addition, you should address how you can use the four VUCA attributes for your own benefit, regardless of how destructive they appear at first sight.

Without going into further detail, I will now suggest the following six stances as focal points of a VUCA AIKIDO:

Agility: I understand my own efficacy and aim for greatest possible independence and self-determination. I am active, awake, light, fast, agile, reactive, adaptive and in movement. I have buffers that do not obstruct me. I am prepared to take sensible risks.

Inspiration & Intuition: I am inspired: intellectually animated, motivated, stimulated. I trust others and myself. I trust my experience, act pragmatically, am able to improvise. At the same time, I am open to ideas and experiments. I value mistakes as opportunities to learn.

Clarity: I know of the meaning created by my actions. I am aware of my values and act accordingly. I know (my) boundaries. I understand my roles. In all of that I am transparent tomyself and others. I take decisions without delay and am consistent in their enforcement.

Interactivity: I give without immediately having to take. I continually invite dialogue. I am well connected to a great number of other people. I use my influence and am aware of the influences of others on myself. I use my network’s swarm intelligence and virality.

Diversity: I value and support the diversity that surrounds me. I am open for other perspectives and can follow these emphatically. I understand my own multifaceted nature and can act in different roles. I make a difference.

Organizationism: I understand myself as an active part of a (social) ecosystem and am aware of the stable instability of the whole. My actions are guided by synergy. I am always learning. I prefer becoming to being. I value the Now in flux. I love and honor life!

These six stances of a VUCA AIKIDO will allow to establish a fundamental resilience to VUCA and act with sovereignty under different (and continually changing) circumstances.

Of course, this is a very abstract outline of these principles. They have to be substantiated for the business context. Attentive readers may already have noticed a more substantiated form of several of theses stances in other posts on this blog. The texts that will be published in the near future will continue to turn to philosophy, social and cultural sciences in order to formulate suggestions that will be as concrete as possible in addressing how VUCA AIKIDO can be realized in practice within organizations.